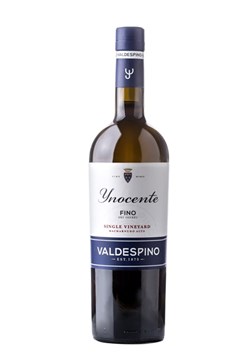 Valdespino is one of the oldest bodegas in Jerez, with a history of Sherry production going back six centuries. Back in 1264, Alfonso Valdespino was one of 24 knights who fought against the Arabs for the city of Jerez with King Alfonso X. As a reward for his efforts he was given land that formed the basis of the bodega. Today Valdespino belongs to the Estevez family, who purchased the bodega in 1999.

The Fino ‘Inocente’, from the Premium collection, is one of their single-vineyard Sherries made from grapes grown in their Marcharnudo Alto plot. It is also the only Fino Sherry that is fermented in oak barrels and boasts a solera system with ten ‘criaderas’, while most Fino Sherries have only three. The Macharnudo vineyard is so admired for the quality of its fruit, that Valdespino decided to make a still wine, ‘Viña Macharnudo Alto’ Palomino. This wine is made from grapes from the highest point of the vineyard which benefits from both the cooling influence of the Poniente wind and optimum sun exposure. Fermented in sherry barrels, it displays a delicate white stone-fruit character supported by soft brioche notes.

The Manzanilla ‘Deliciosa’, also from the Premium collection, is sourced from the Miraflores vineyard in Sanlúcar de Barrameda. On the palate it is very dry but crisp and fresh, with a slightly saline finish.

Valdespino own 750 hectares of their own vineyards in Jerez, which is extremely rare in this region and allows them close control over grape quality. They are the only bodega to make single vineyard Sherries and are also renowned for their VOS (Very Old Sherry) with over 20 years of ageing and VORS (Very Old Rare Sherry) with over 30 years of ageing. The Oloroso Solera 1842 VOS, for example, is produced from a solera that was established in the mid-19th century.

The ‘Single Cask’ Palo Cortado is unique. It is made from grapes grown in the Macharnudo vineyard, all of which are from a single vintage, and rather than ageing in a solera system of many barrels, it is aged in just one barrel. This unique Palo Cortado boasts a myriad of flavours: dried fruits, orange zest, hazelnuts and figs. It is everything that we love about Valdespino Sherries in a single glass and truly is something special.

Valdespino has also developed a collection of aperitifs by recovering old recipes and original labels from the early 20th century using Very Old Oloroso Wines. The Vermouth is made from Very Old Oloroso with Moscatel, combined with extracts of mugwort, coriander, elderberry and gentian, chamomile flowers, aromatic cloves, cinnamon, dried Seville oranges and juniper berries. The final blend is aged in former Oloroso barrels. Quina comes from a combination of Very Old Oloroso Wines with Pedro Ximenez from the soleras of the PX ‘EL Candado’. A hydro-alcoholic maceration takes place with Cinchona bark (Quina), gentian root, natural liquorice extract and nutmeg, along with a selection of dried citrus fruits.

The range is completed with two premium spirits: the ‘Solera Gran Reserva’ Brandy de Jerez and the ‘Ron Viejo’ rum. The firm began importing and solera ageing rare distillates in the 1900s and many of these stayed tucked away in a corner of the bodega until 1999 when the Estevez family acquired the firm and these treasures were rediscovered. Over decades, the rum solera has been topped up with selected Panama (70%) and Dominican Republic (30%) rums. On the nose it beautifully blends complex notes of caramel, spice, sherry and citrus. The Brandy de Jerez is a blend of the finest ‘holandas’ distillates and is aged in the solera system for over 25 years. It is warm and complex on the palate with hints of candied orange, oak, honey and hazelnuts, with a very long finish.

The Palomino grapes for the Fino ‘Inocente’ are grown in the Pago Macharnudo – one of the top single-vineyard sites on the Jerez DO. At 135 metres above sea level, it is one of the highest altitude sites in the region and has a south-east aspect with a 10% gradient – perfect exposure for the Palomino to reach optimum levels of ripeness. Soils are white ‘albariza’ - rich in calcium carbonate, silica and clay. Albariza has excellent water retention properties and acts like a sponge, but it also forms a hard surface layer when it dries out, preventing evaporation. After the harvest, channels are dug between the vines to exploit these properties and trap the winter rains, creating a water reserve to sustain the vines through the heat of the Jerezano summers, during which temperatures can exceed 38°C.

Upon arrival at the winery, the Palomino grapes are very gently pressed and the must is settled. Unusually for modern-day Jerez, fermentation is traditional and takes place in 600-litre American oak barrels. After the Palomino is fermented to dryness, it is fortified to 15% and the barrels are only partially filled. This allows a thick veil of 'flor' (yeast) to develop on the wine's surface, protecting it from oxygen. The young wine, known as the ‘sobretabla’, is then fed into the ‘Inocente’ solera system where it ages biologically under the ‘flor’ and is fractionally blended through the ten different criadera levels. The finished Fino ‘Inocente’ has an average age of 10 years, making it considerably older and more complex than your average Fino.

Straw yellow in colour. Savoury aromas bread dough, almonds, olives and dried apples dominate on the nose. Bone dry and bracingly refreshing on the palate, with a saline minerality and a long and complex finish.

Other wines from this producer